Jason and Amanda were driving to a family birthday party one Saturday afternoon, Jason was driving safely through an intersection when a driver ran a red light and collided into Amanda’s side of the car. The other driver died of head injuries from the accident. Amanda was left with multiple injuries. She had suffered a severe closed head injury with intra-ventricular hemorrhaging and a diffuse brain edema. In addition she had a crushed pelvis and femur. She had a ruptured bladder and suffered lacerations to her liver. She spent over three months in the hospital undergoing several surgeries.

Amanda’s life had changed forever. Jason and Amanda had just recently inherited a 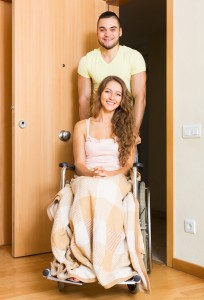 home a year earlier when Amanda’s grandmother had passed away. It was a small two story home with a large yard. Jason knew that Amanda would never move from her grandmother’s home but there had to be changes made if she was going to successfully live there.

“Amanda would be able to fully use and navigate the entire first floor of her home.”

After talking with the doctors, nurses, and therapists, Jason had a good idea of the changes that would be needed for their home. He called several local contractors and one called him back. He found out it would take over four months to get an addition built to meet Amanda’s needs and the contractor couldn’t even get started for another eight weeks. That’s when he called Better Living Express and talked with a FACS Advisor. He explained the requirements and needs Amanda would have when she returned to their home. After learning more about the existing home, the FACS Advisor recommended an addition plan that could be modified to provide the master bedroom and bathroom that she would need. It also allowed additional room for a kitchen which was very small in the existing home.

The best part was that the addition could be completed in about six weeks. It would be built with all of the features Amanda would need to make her transition to living at home much easier. Jason showed the plan to Amanda in the hospital. While she wasn’t able to fully understand what it meant, Jason was excited that he had the opportunity to finally begin to prepare for Amanda’s return home. The new addition provided the following benefits:

Amanda moved back into her home after her extended hospital stay. Within a year she had made amazing progress and was navigating her home easily. While her physical injuries had healed well, she was still working with some of the side effects of her brain injuries. It didn’t matter to Jason, he was happy to have his wife home and he enjoyed helping her cook in their new kitchen.