Margaret was found in her tub after having fallen by her daughter and son-in-law. Margaret suffered from mild Osteoporosis, but other than that, was in good health despite leading a relatively sedentary lifestyle. This was just the beginning of a series of events that would virtually eliminate her mobility. Margaret’s husband had passed away four years ago and she lived by herself in her two story home with her daughter, Amy, and son-in-law, John, living about 2 miles away. They checked in daily and luckily found her very quickly after her fall.

Margaret went through surgery two days after her fall to repair her hip. She was in the 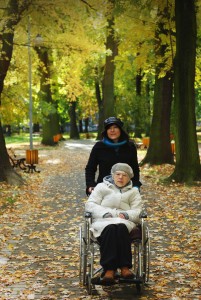 hospital for an additional seven days and was then sent to a subacute rehabilitation facility for six weeks. Amy and John talked with an Occupational Therapist to get learn about what they could expect with Margaret’s recovery and what she would need. It was obvious that Margaret couldn’t move back home. Given her condition and the expected recovery time that was going to take more than a year, they had to start reviewing her living options. The hospital was required by the state to inspect the home she would be returning to before they could release her from inpatient rehab.

“The addition gave Margaret the privacy that she wanted, when she wanted it, but allowed her to be cared for by Amy and a home care provider in Amy and John’s home.”

After Amy and John discussed the options with Margaret that day in the hospital they decided that they would have to build an addition onto their existing home. They started researching contractors and options that night. The next day at the rehab center they mentioned what their plans were to Margaret’s Occupational Therapist Assistant (OTA). She told them about Better Living Express. That afternoon Amy called and talked with a FACS Advisor. Amy had researched building an addition already and knew it would take at least four or five months going the “normal” route of hiring a contractor to build it onsite. Her FACS Advisor reviewed a plan that would work for Margaret and their home. He described the steps in the process, what to expect, and a realistic timeframe which was still 7 weeks if they started today. Amy and John agreed to start immediately.

The process moved quickly and offered these benefits:

Margaret moved into Amy and John’s home about 10 weeks after her fall. It was a traumatic and life changing event for Margaret and a very stressful time for Amy and John. However, because they learned of the FACS offered by Better Living Express through Margaret’s OTA, Amy were able to react more quickly and get a family care plan implemented almost immediately.