In March 2012 Joan answered the phone early one morning and heard her son’s unit commander on the other end. All she could do was make a few notes: Jake has been wounded… gunshot wound to abdomen… medevac’d to field hospital … update when there is more information.

After five days she was informed her son was on a medical ship and that he been shot in the stomach. As a combat medic, he had fallen running to the aid of a comrade in Afghanistan. His stomach, spleen, small intestine, and pancreas were damaged and he was paralyzed from the chest down. Jake spent the next two years in and out of four hospitals and endured over 40 operations.

Joan and her husband, Alan, had been planning retirement as empty nesters. Their 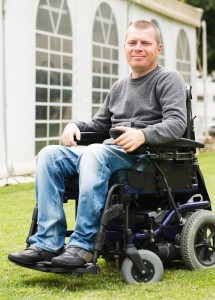 life had changed as they were about to become the full-time caregivers for their son. They were needed to assist with all aspects of his daily living. Joan and Alan still lived in the same home that they had raised Jake and his sister in. It was a small, three bedroom home with a narrow hallway on a large, well landscaped piece of land that Alan took lots of pride in maintaining.

“Jake is able to access all common areas of the home, and as an adult, still have privacy in his own space within the home. “

While Jake was in hospital after hospital, Joan called and talked with a FACS Advisor at Better Living Express. Joan reviewed their current home’s floor plan, the problems with modifying it, and what Jake’s needs were going to be when he arrived home. With an open piece of land and the need to stay in the current home, several different floor plans for additions were discussed. Because of Jakes larger power wheelchair, a modified version of a standard plan was decided upon. This customized plan offered these benefits:

Jake qualifies for 30 days of annual respite care at the nearby VA Medical Center. The family uses this twice a year to give Joan and Alan the time they need together and Jake feels comfortable there. Alan enjoys gardening and landscaping in the yard that he worked for over twenty years to create and Jake gets the care he needs with a sense of privacy when he wants it.